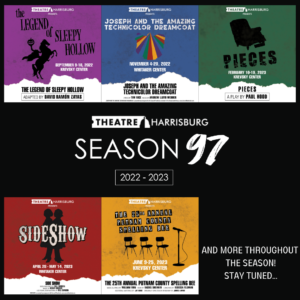 Theatre Harrisburg, one of the oldest community theatres in the United States, has announced its 2022-2023 season.

The theatre’s 97th season will distinguish itself in that it will feature works from two Harrisburg-area playwrights: David Ramón Zayas and Paul Hood.

Executive Director Lorien Reese Mahay stated, “We are proud to showcase the work of two extraordinary local playwrights in our season. It is important that we embrace our role as storytellers in our community and offer the chance to see new works staged alongside beloved classics.”

The 2022-2023 season opens in September 2022 with Zayas’ adaptation of Washington Irving’s classic American folktale, The Legend of Sleepy Hollow, and combines music, movement, light, and shadow to tell the story of just how persistent and pervasive superstition can be.

“It’s always rewarding to hear your words come off the page when actors are performing your work,” says Zayas. “Our region is so rich with talented artists, it is an honor to be part of this theatre community, and when a theatre of your peers decides to use one of your plays as a key component of their season, that reward is even greater.”

The season continues in November 2022 with the Tony® and Drama Desk Award nominated musical, Joseph and the Amazing Technicolor Dreamcoat, followed by Hood’s original drama, Pieces(February 2022) and the musical drama Side Show (April/May 2023). The season closes with the Tony® and Drama Desk Award-winning musical comedy The 25th Annual Putman County Spelling Bee (June 2022).

“It’s an exhilarating time for the arts in Harrisburg,” says Hood, whose works have been performed and workshopped at venues across Pennsylvania and New York. “I’m excited for the resurgence and the opportunities allotted to local playwrights like myself. I’ve long awaited the chance to showcase one of my works at The Krevsky Center for Theatre Harrisburg.”

Theatre Harrisburg currently stages its more lavish productions at Whitaker Center for Science and the Arts, while showcasing its more intimate fare at the Jay and Nancy Krevsky Production Center, 513 Hurlock Street in Harrisburg.

Season subscription and ticketing information will be available this summer.